In the historical center of Benidorm, there is a promontory that separates the two major beaches of Benidorm, the Levante, and Poniente beaches. On top of this cape, you can find the "Plaça del Castell", a square that has breathtaking views over both parts of Benidorm. This square is a popular place in Benidorm mainly because of the view. Travel brochures and websites that want to highlight the beautiful side of Benidorm often use pictures of this part of the city.

The "Iglesia de San Jaime y Santa Ana" is located on the square. The side of this eighteenth-century church borders on "Plaça del Castell". There are a number of benches in the square where you can relax. In the center of Plaça del Castell is a courtyard with checkerboard tiles.
This part is called the "Mirador del Castillo". In front of that part, old canons remember the castle side of the square. Recent archaeological excavations have uncovered remains of a fortress built on this site long ago. These remains can now be admired through some glass floors.

At the end of the "Mirador del Castillo", you can go down a flight of stairs to a lower viewing platform, The "Balcon del Mediterraneo", where you can have an even more breathtaking view. You can find more information about the Balcony of the Mediterranean Sea here.
Churches Popular places 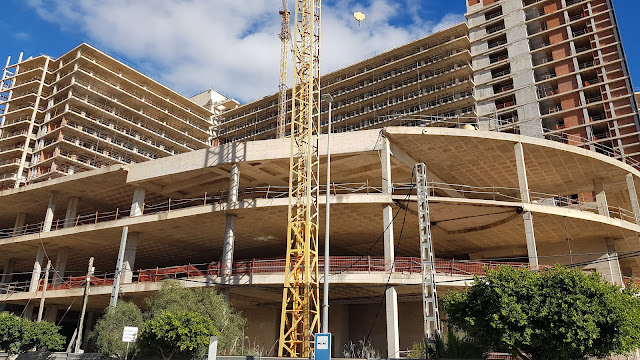