The most Spanish holiday song is actually Belgian

The most Spanish holiday song is actually not Spanish but Belgian. We all know the world-famous song Eviva España, but did you know that that holiday song is not of Spanish origin at all? Yes, it is about sunny Spain, but originally the song was composed by the Belgian composer Leo Caerts and was recorded for the first time by a local Belgian Flemish singer Samantha in 1971. 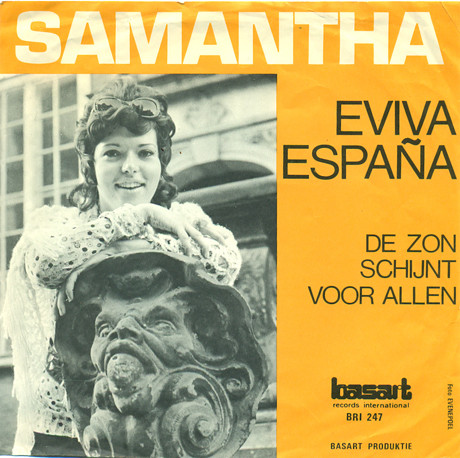 In the original song, she sings about the fact that she went on holiday to Spain, that it was so much fun there that she wants to go back to Spain as soon as possible. It was a big hit in the Flemish-speaking part of Belgium. Not much later the Dutch singer Imca Marina made it a worldwide hit in other languages as well. Meanwhile, the song has been covered by dozens of other artists, also Spanish ones.

Worldwide there are now more than 400 different versions and more than 40 million copies have been sold. Samantha's first version made it to about 450,000 copies. Sometimes the title is changed to "Viva Espaná" or "Y Viva España", probably because "Eviva España" is not correct in Spanish. The word "Eviva" means nothing.

So the next time you're on holiday in Benidorm and singing along to the song, you can brag to your friends that you know where this Spanish sing-along originally comes from. Eviva Espana!

You can find the original version on YouTube here.

By Harry fabel
Every year in September there is a fantastic pride week in Benidorm. With a well-established and welcoming gay village set in and around the narrow, picturesque streets of the Benidorm Old Town, the gem of the Costa Blanca plays host to many people's favorite event on the LGBTQ+ calendar, the Benidorm Pride Festival! Famous for its beautiful beaches, fantastic weather, and fabulous nightlife, Benidorm is one of Spain's most popular holiday resorts, loved by visitors from all over Europe and beyond. This famous LGBTQ+ Pride event completely fills the city street and hotels so you need to book well in advance. D on't forget your best rainbow outfits and attributes to make the city even more rainbow-colored. Picture by Harry Fabel It has grown into a week-long event, focusing on the key ingredients that make Benidorm unique. The Benidorm Pride Festival has well earned its recognition as the European Summer Closing Pride! Picture by Harry Fabel Fun, Friendly, and a little bit
Post a Comment
Read more

The new Mirador of Benidorm

By Harry fabel
The famous and much-photographed viewpoint of Benidorm has been completely renewed. The archaeological excavations are over and the city has given the square a facelift so that the selfie-making visitors can once again enjoy the fantastic view. Picture by Harry Fabel In June 2019, archaeological excavation work was started at the Mirador del Castillo, meaning that it was closed to visitors throughout the summer. A search was done, among other things, for the remains of the old "Castillo de Benidorm" that was destroyed 200 years ago by the British. On the well-known large rock that separates the two beaches stood a fortress that had the function of defending the city against the raids of Algerian and Berber pirates in the 14th, 15th, and 16th centuries. Later the Castle was abandoned and nowadays there are only a few remains of walls on the rocks of the lookout point, which is also known as the "Balcony of the Mediterranean Sea". Picture by Harry Fab
Post a Comment
Read more

By Harry fabel
Spain is probably one of the most friendly LGBT countries in the world. So traveling to Benidorm will give you no problems at all when you are gay. But which hotel do you choose in an already very gay-friendly city? Picture by Pixabay It is recommended to book a hotel right in the old town because this is where the gayest bars, restaurants, and clubs are located. The insiders call it the Gay Village. The Gay Village is located in the oldest part of the city and consists of about 4 streets. There are about 15 gay businesses in that area. Their numbers can vary, some close and others open, it is a constant change. Some other gay businesses are in close proximity to the Village. Most local gay people themselves are working in the old town. Here is a list of hotels you could consider booking your holiday based on their location and great service. Just keep in mind that there are lots more hotels to choose from in the Benidorm old town. Hotel Voramar Hotel Madeira Hotel Villa del Mar
Post a Comment
Read more
Benidorm
+22
°
C
High:+22
Low:+20
Rain